On Tuesday, October 7, 2014, I was honoured with the Prime Minister’s Award for Teaching Excellence (Certificate of Excellence) with 9 other teachers and 7 Early Childhood Educators. For 3 1/2 days we celebrated with tours and festivities in our nation’s capital, culminating with meeting the Prime Minister, Stephen Harper. 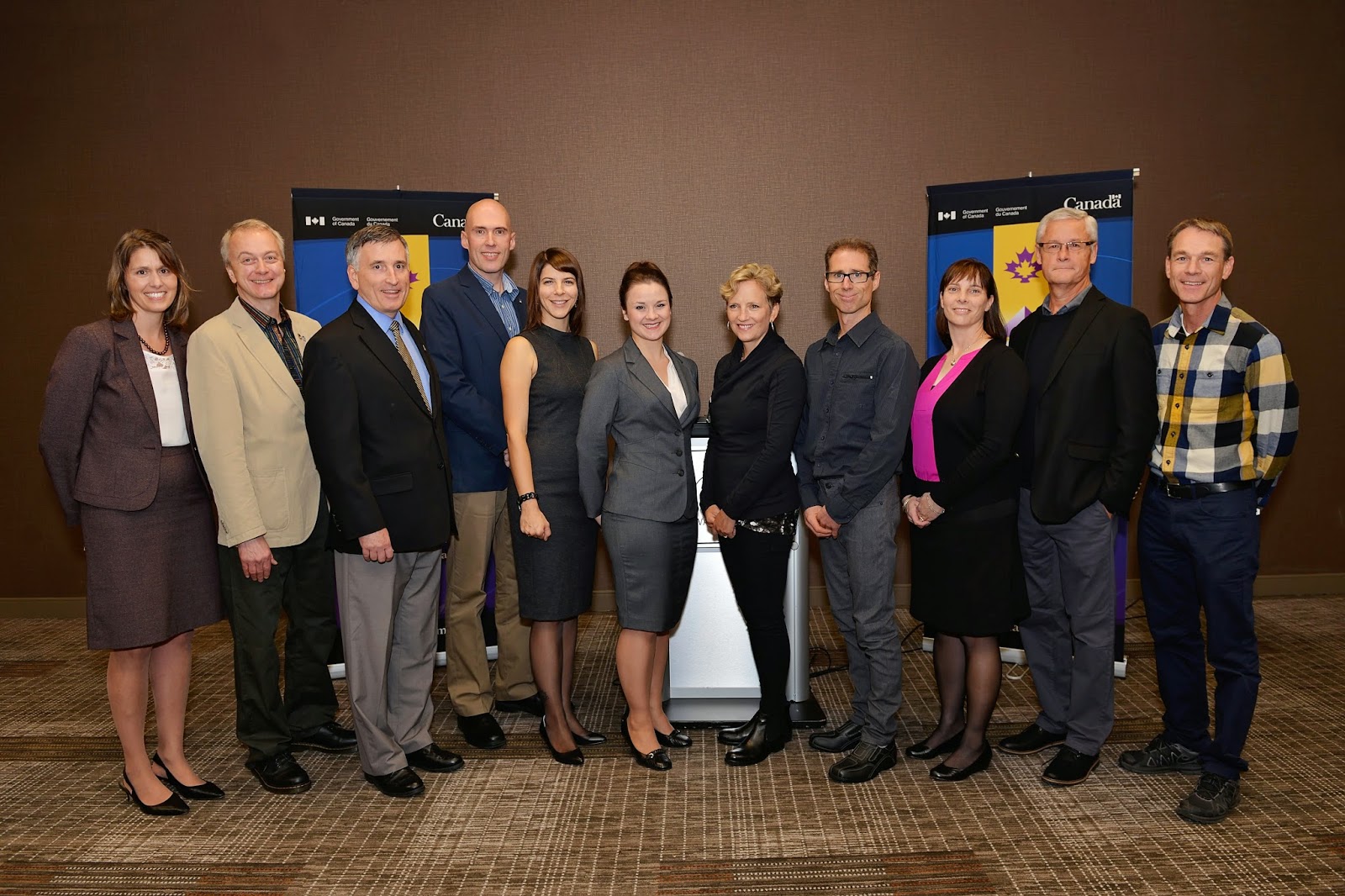 On the first day David Coulombe, Media Specialist, counselled us on how to deal with journalists and interviewers. He advised us to prepare our “stories” in advance, so that we would not be tongue-tied. Good advice!

We then went on a tour to Victoria Island (a 10 minute bus ride away from the hotel) for an  “Aboriginal Experience”: Two lovely young aboriginal women in traditional dress showed us the ways and customs of their ancestors with a tour of their grounds, complete with tepees, a mini-longhouse, and many original hand-made tools, finishing with a delicious snack of freshly made Bannock and blueberry jam. The highlight of the morning was when they entertained us with traditional dance, then invited us to join them in a circle dance, hand-in-hand.

Award winners brought guests and family to this event, so we were a large group in the video! 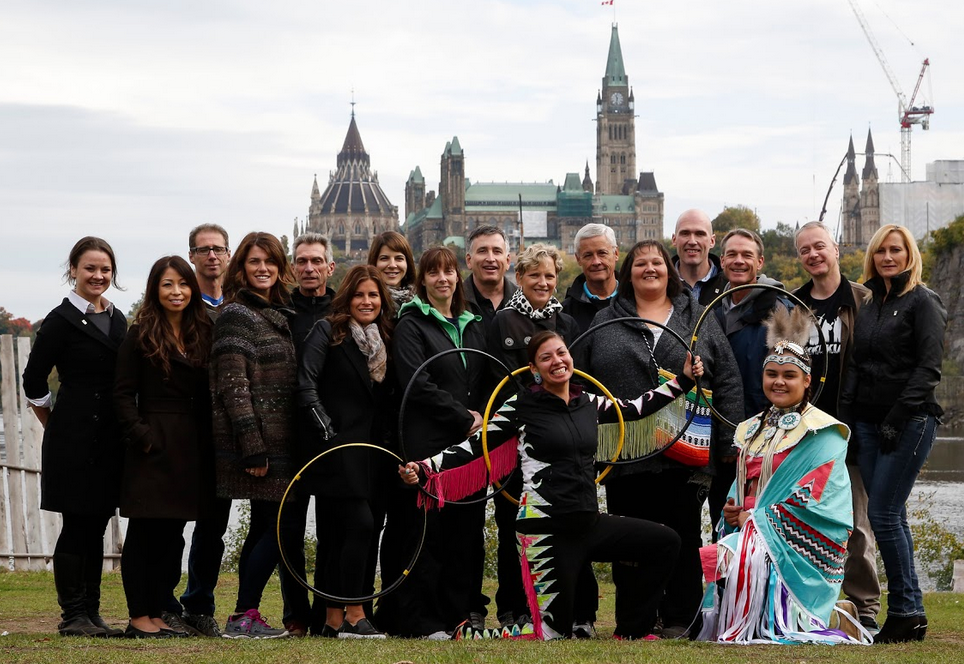 In the afternoon we had a tour of magnificent Rideau Hall
(home of the Governor General, David Johnson):

The Tent Room at Rideau Hall with our guide

The Ballroom at Rideau Hall

Later, we visited the Prime Minister’s wife, Laureen Harper, at their home on 24 Sussex Drive. We nibbled on cheese and crackers, and had cocktails in her living room. She served us snacks which included Lankaaster cheese (truly “the best cheese in the world”). Mrs. Harper was a delightful and gracious host, who made everyone feel very comfortable the minute we walked into the door. She regaled us with stories of visiting diplomats, her son’s love of volleyball, her daughter’s love of computer science, her husband’s terrible hockey playing skills, their cat Stanley (named after the Stanley Cup), her passion for homeless kittens and the clever ways she convinces people to adopt them: “Oh, I’ve NEVER seen this kitten so calm with anyone ever before… What would you name him/her if it was yours?” She spoke of her fondness for teachers, and how her children have always thrived at school because of their great teachers and mentors. At one point, a little boy about 3 years old (the son of fellow award recipient Tiffany Poirier) walked in the room in his little suit and tie and Mrs. Harper exclaimed: “Oh look, a little banker! Or maybe, the future Prime Minister. Or maybe, the husband of the future Prime Minister!” which got everyone in the room cheering. 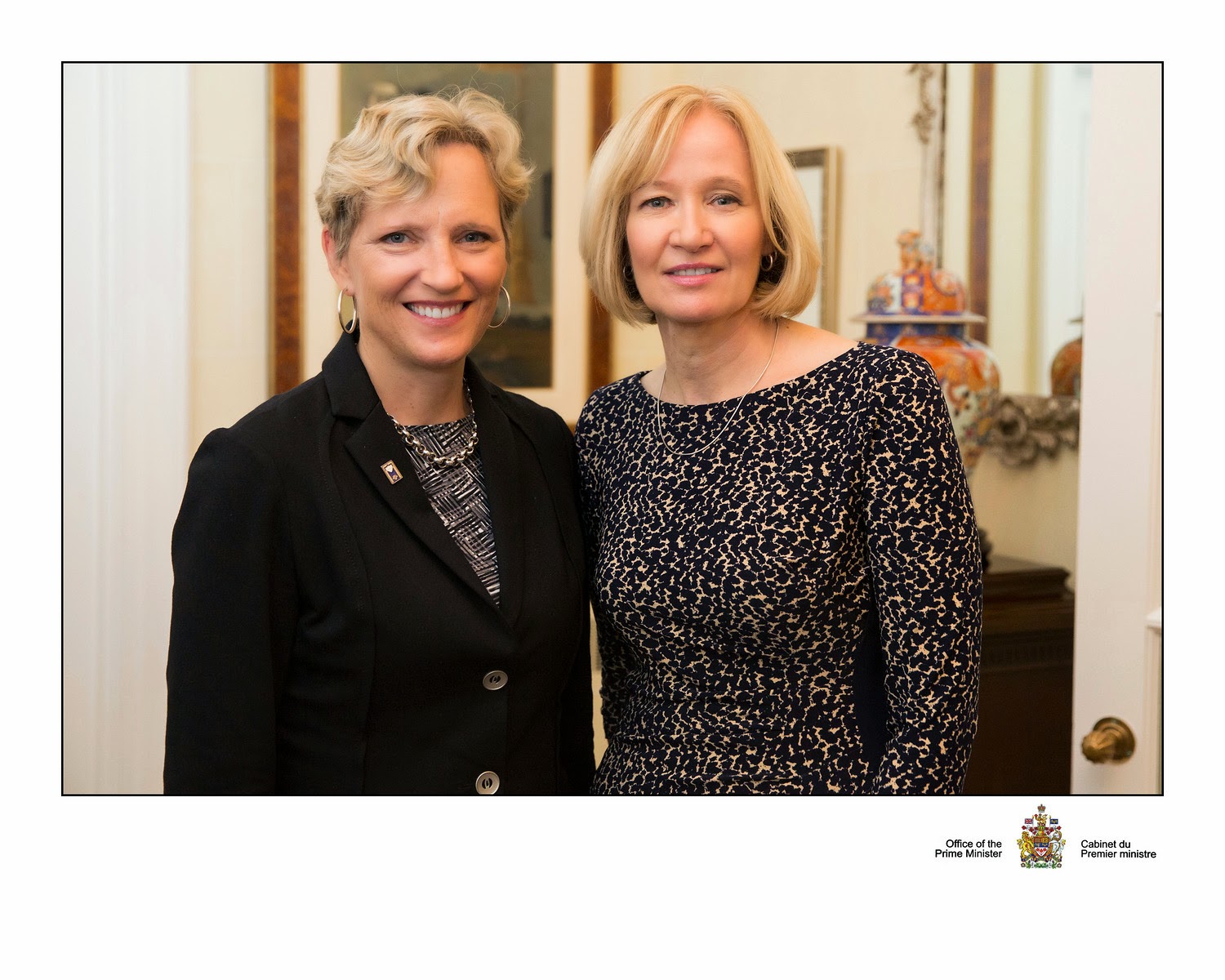 On the third day we had a tour of the Parliament Buildings. What a magnificent place! The library was breathtaking; I felt like a stepped into “The Beauty and the Beast's” library. 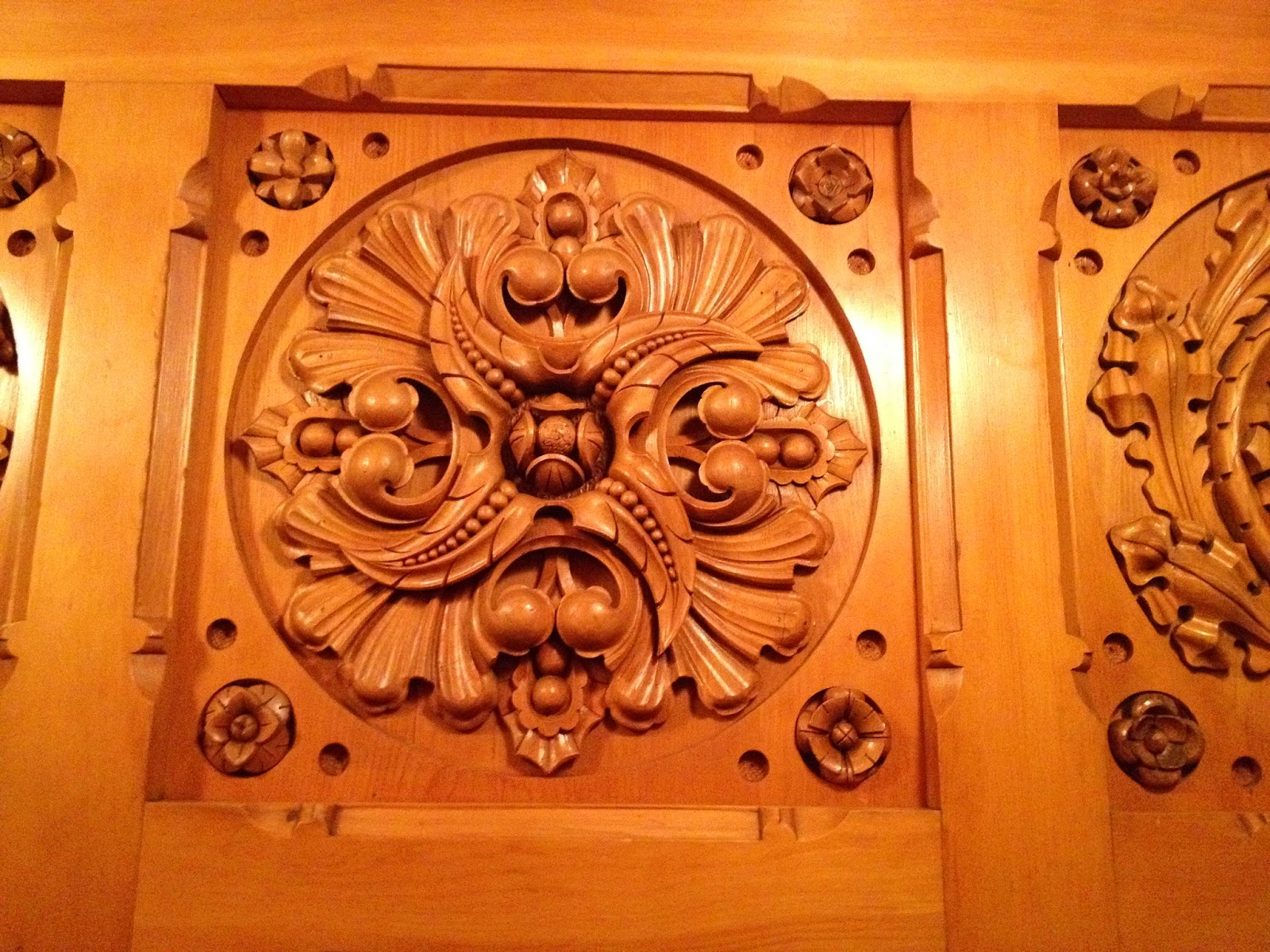 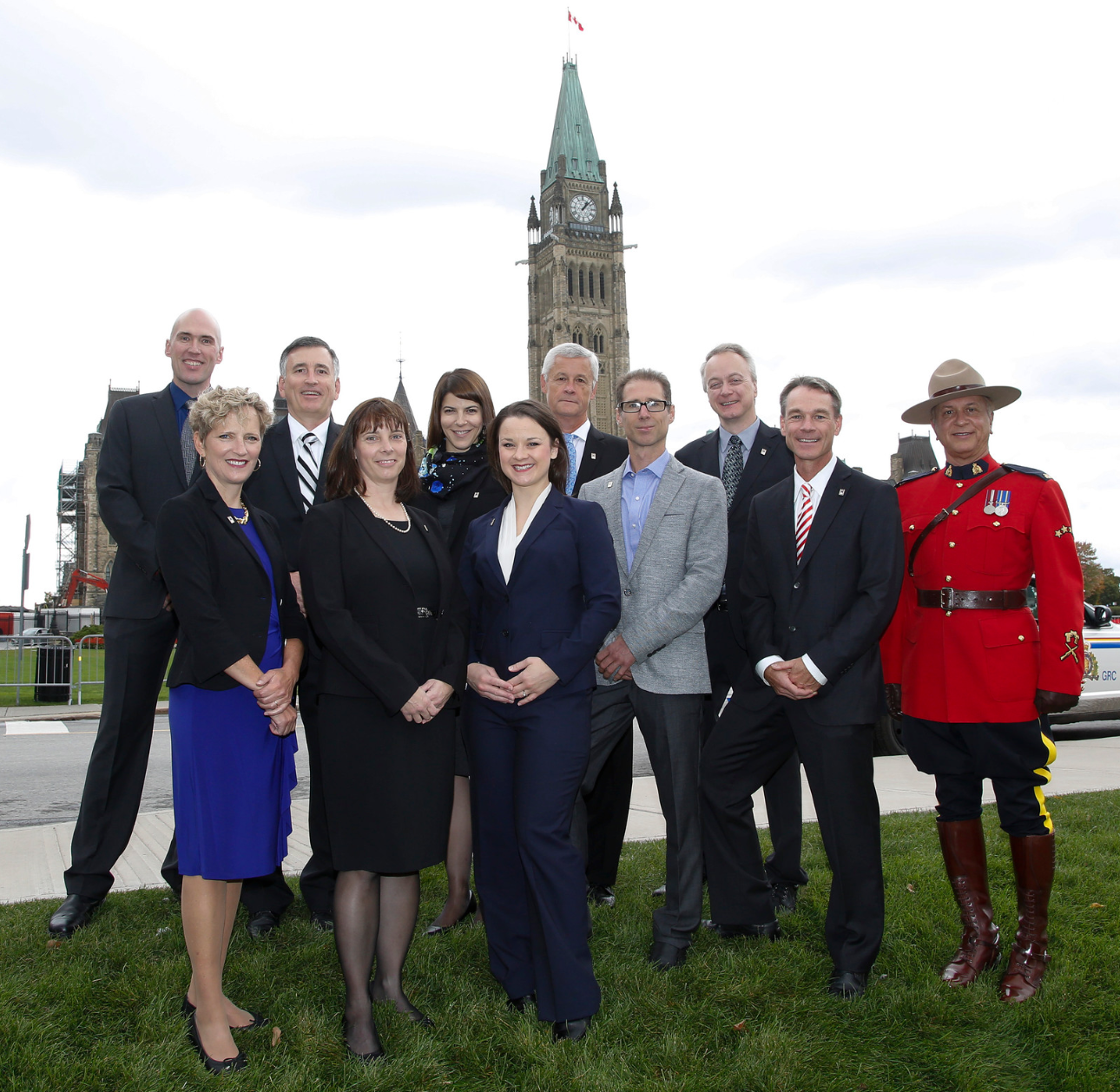 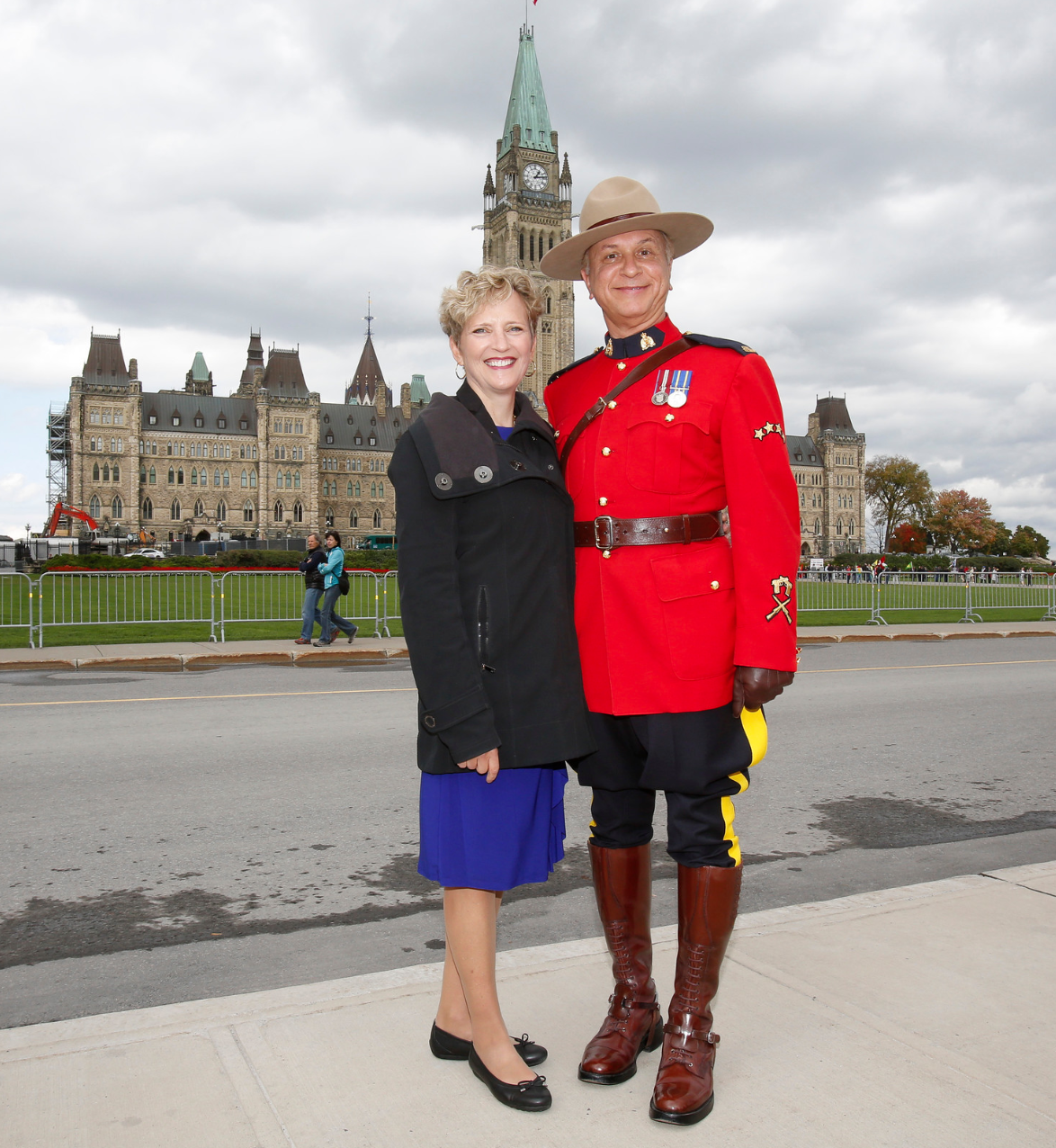 Later in the day, we received our award plaques from the Prime Minister, Stephen Harper. This was the same day that parliament had voted on sending 600 soldiers to Iraq to battle ISIS, so there was a lot going on and everyone seemed a little tense. But Mr. Harper was very gracious, shook all of our hands and smiled gamely for pictures. He asked me where my school was, and when I told him it was in Toronto at Bayview and Lawrence, he said that he grew up in Leaside: who knew?

After the ceremony, we were invited to a reception hosted by the Speaker of the house, The Honourable Andrew Scheer. 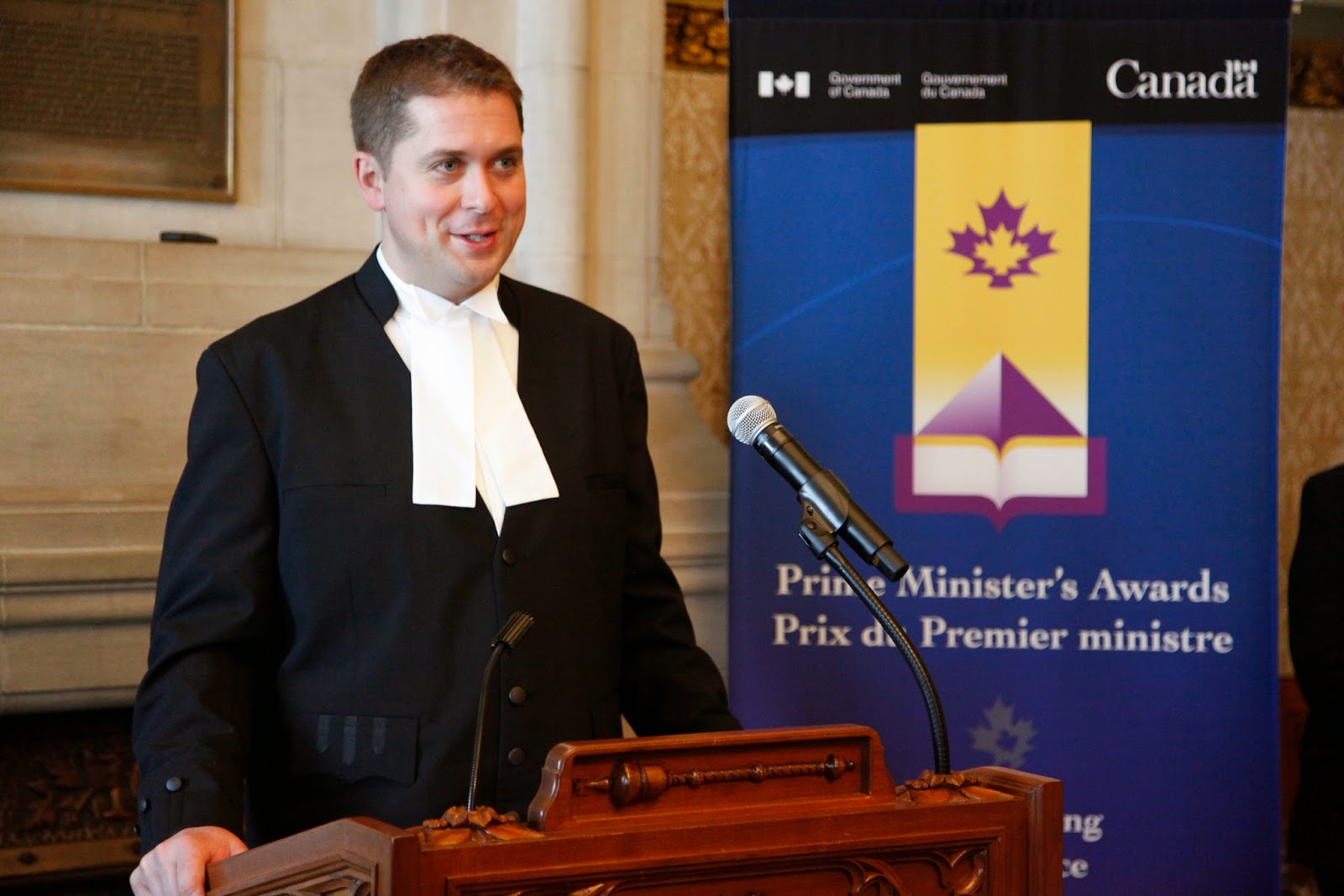 After he spoke, The Honourable Kerry-Lynne D. Findlay also welcomed and congratulated us. 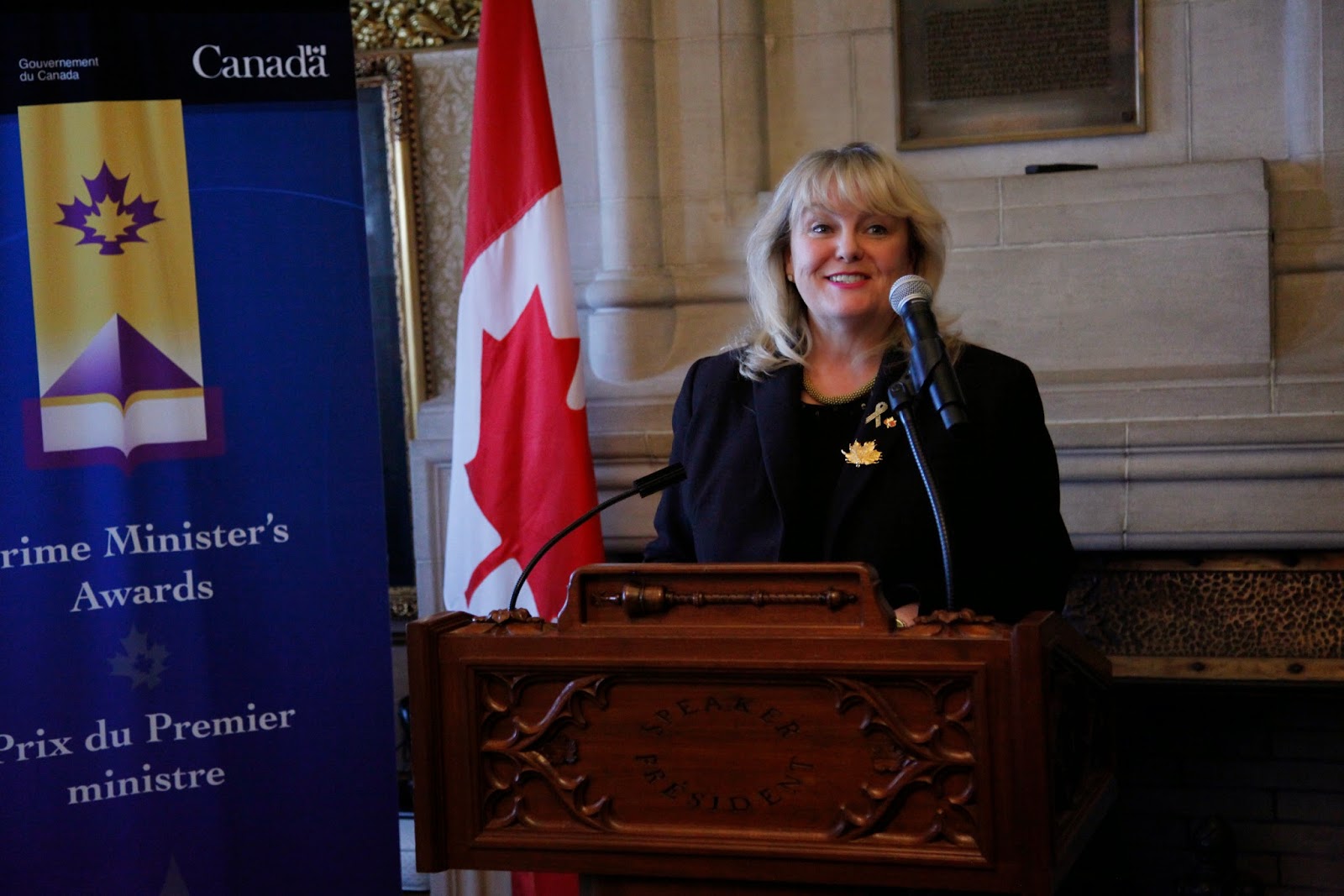 Many MP’s joined us after to congratulate us on our awards and we were able to witness their impressive networking skills! It was lovely meeting and chatting with The Honourable John Carmichael, MP for Don Valley West (my school's riding), Lawrence Hanson (Assistant Deputy Minister at Industry Canada), The Honourable Peggy Nash, and The Honourable Rathika Sitsabaiesan, from Toronto. 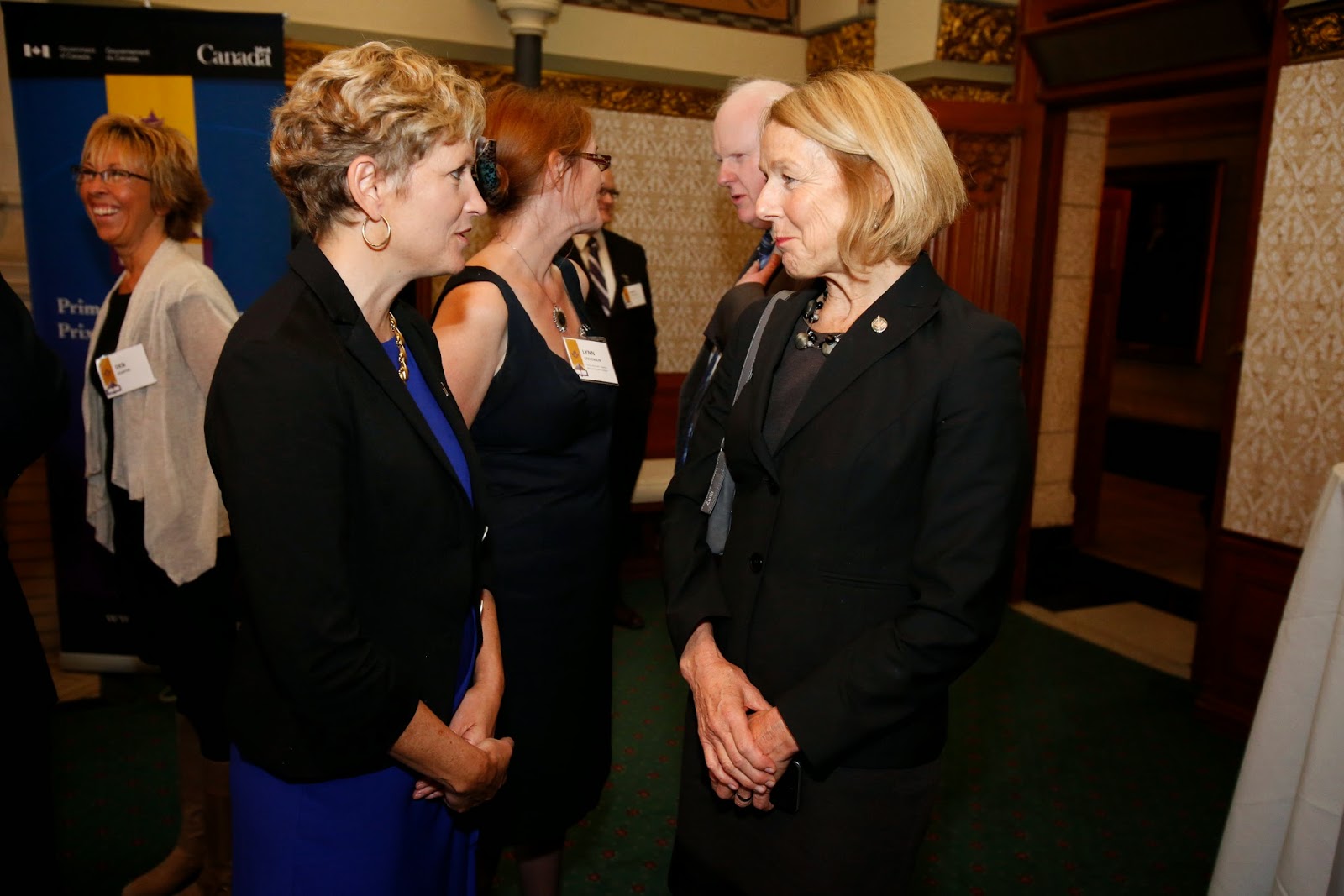 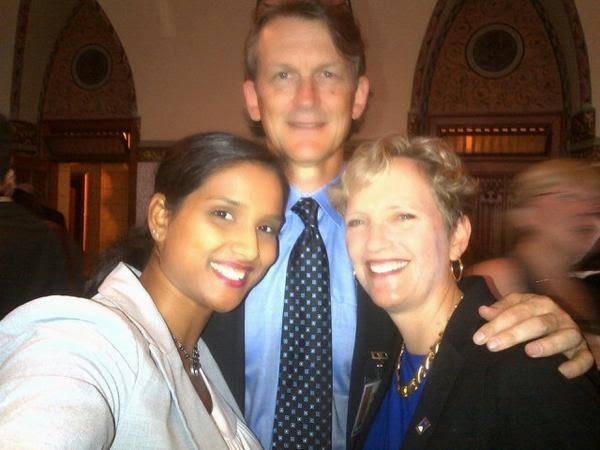 Selfie taken by Rathika Sitsabaiesan, with my husband Steve Melles 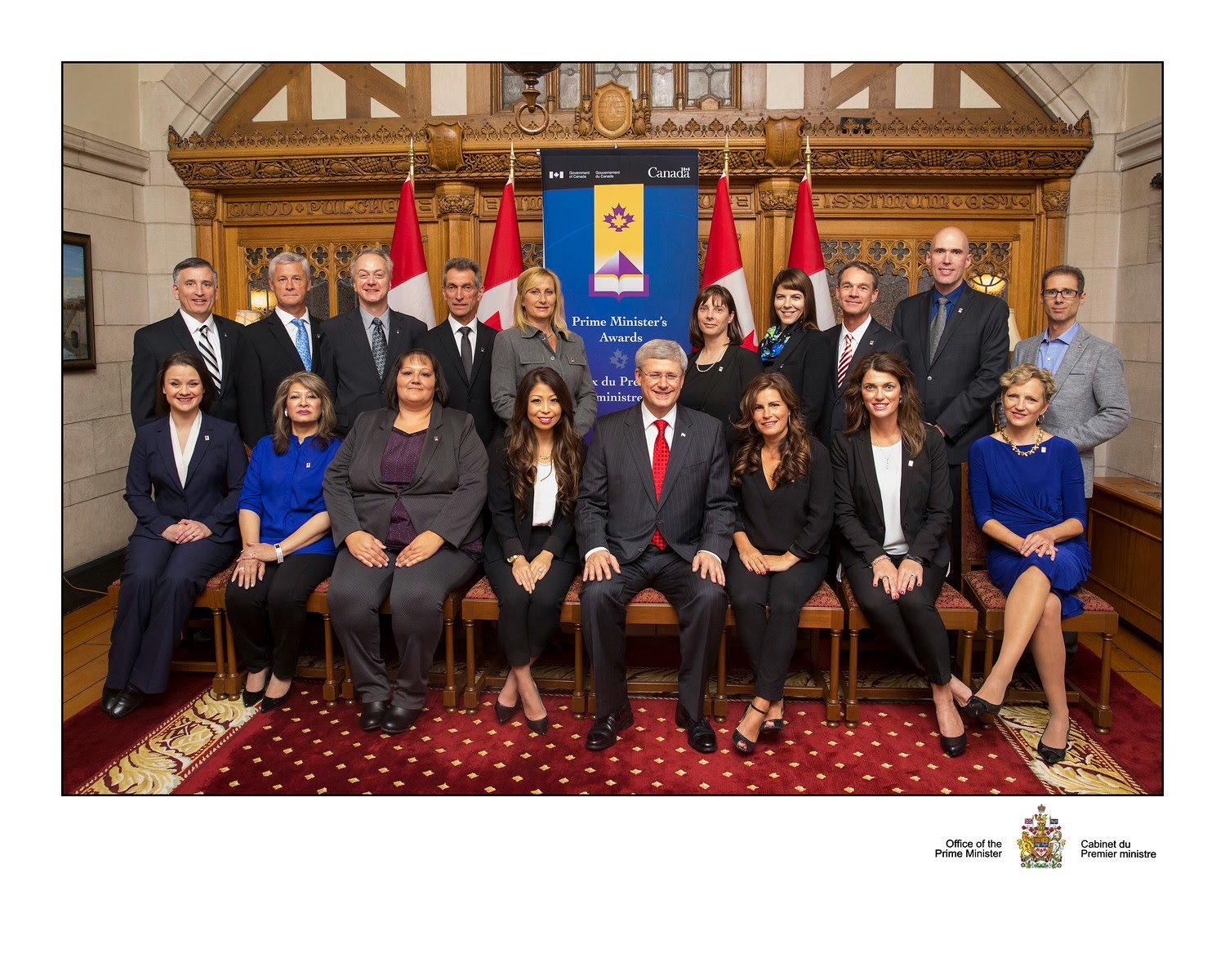 The last day in Ottawa we participated in a panel discussion of our best teaching practices called “Teacher Talk”, where each award winner spoke for 5 minutes about the projects they are doing with their students. We were introduced by Lawrence Hanson, and CBC radio host Joel Westheimer did a great job emceeing the event. 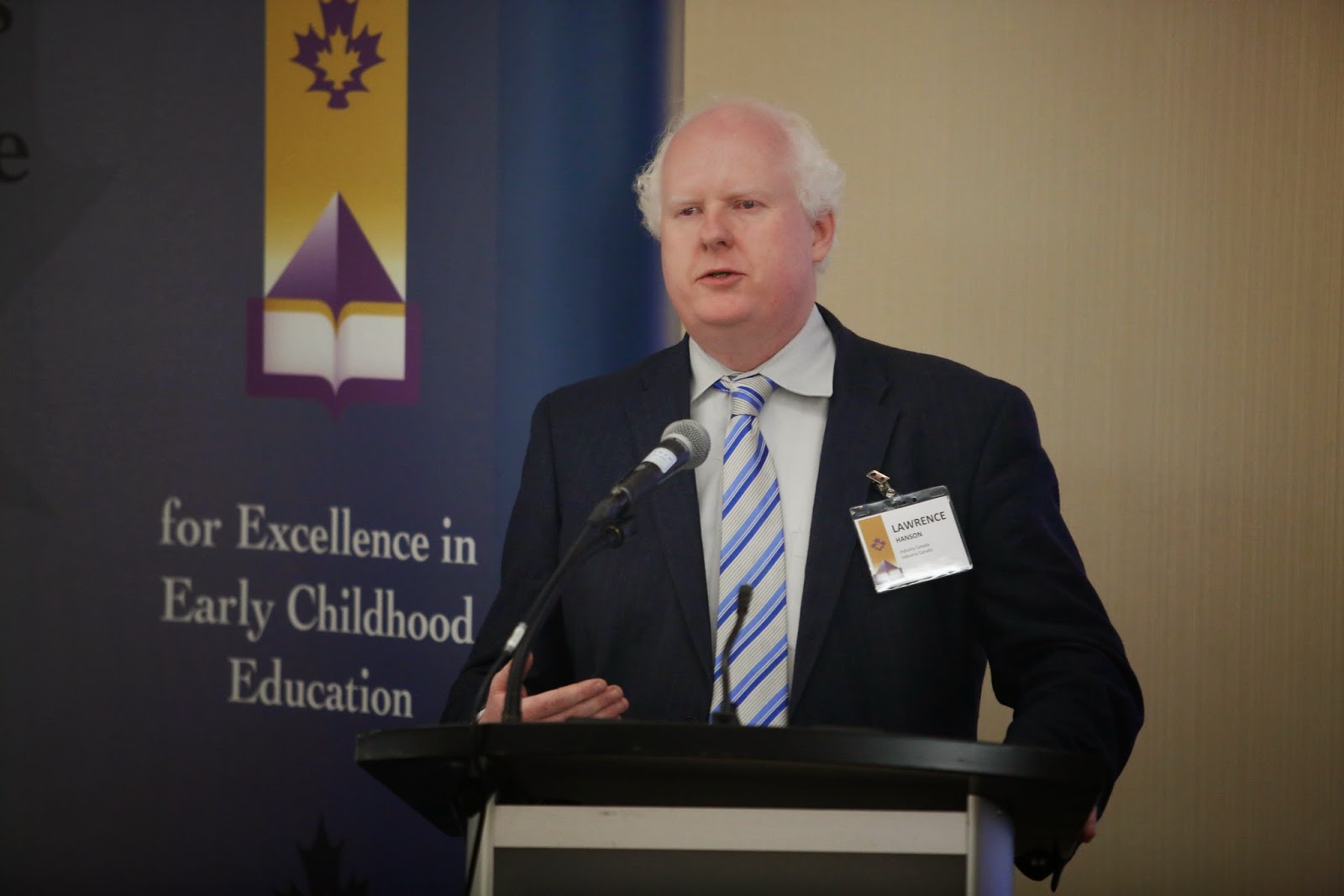 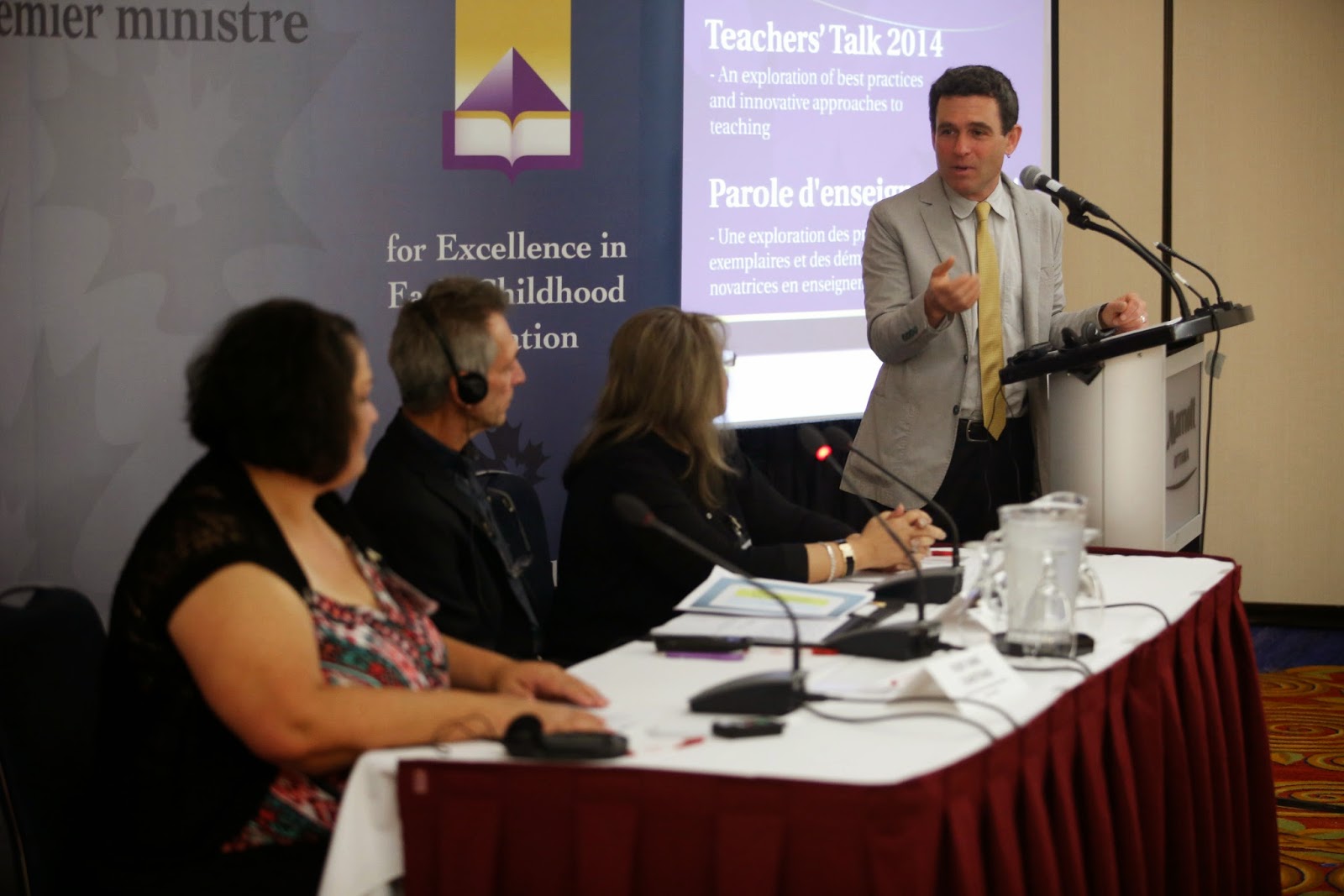 This was a wonderful opportunity to hear first hand from the teachers I had been hanging out with for three days about their passions and methodologies. Click here to read mine. 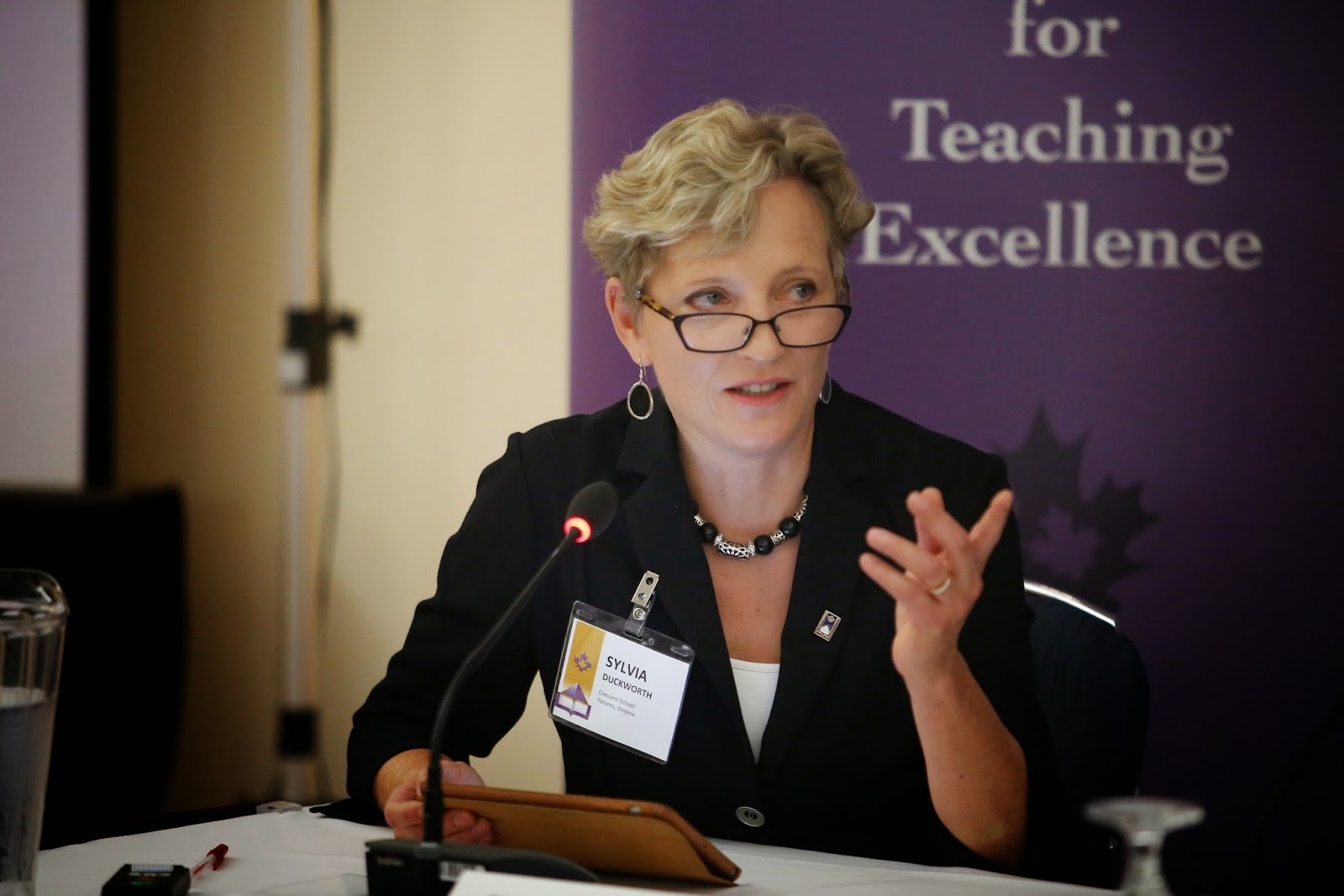 I was sad to leave my new friends but I look forward to returning to my classroom with an armful of inspirational ideas from my award winning cohorts.

I would like to thank my nominators, Jacky Tse, Judy Carmichael, Dalia Besaparis, LouAnn Ballard, Diane Ankenmann, Francoise Brown, Sylvia Kwan, Kerrie Robins, Edite Sammons, Geoffrey Collins, and Sandra Boyes for taking the time and thought into writing the letters of support; Crescent School for their ongoing support for what I do in class; From the Prime Minister’s office: Alex Meduri, Emily LeBlanc,  Lynn Stevenson, Melissa Wood, and Stephanie Pettit for designing such an entertaining and informative event during our time in Ottawa, and for keeping track of us and making sure we got to where we were supposed to go. Thank you to the Royal Bank Foundation for being the key sponsor in this momentous event. Thank you Martin-daddy, Audrey, and Steve for coming to Ottawa to celebrate with me. "Un gros merci" to my PLN for always giving me such wonderful ideas and to my students for inspiring me every day. A big hug and thank you to Wendy Maxwell, my hero and winner of this award in 1999. Last but not least, I would like to thank my husband Steve and daughters Alana and Lauren for putting up with me and the many hours I spend on the computer pursuing my passions: teaching French with AIM and educational technology.

Post-event note: Thank you very much M.P. John Carmichael for acknowledging Maureen Sims and I in the House of Commons!