On Friday, September 28, 2012, I was honoured by the Canadian Association of Second Language Teachers (CASLT) with the H. H. Stern Award, given annually to a Canadian teacher who has demonstrated innovation in the Second Language Class. It was the successful integration of technology and social media in my French classes that persuaded the CASLT awards committee that I was a worthy recipient of this prestigious accolade.

Flashback to exactly eighteen months earlier. I am at the OMLTA (Ontario Modern Languages Teachers’ Association) Spring Conference in Toronto, talking to my AIM colleague, @joellerudick, who was trying to convince me to join Twitter. I was reluctant, thinking “why would I need more social media in my life”? But she persisted, and sat down with me for a one-on-one tutorial with Twitter and Tweetdeck and before I knew it, I was launched into the Twittersphere.

Little did I know that Joelle’s tutorial would be a life-changer for me. While I have always been interested in technology, the resources, insights and inspiration I gained almost immediately from other educators on Twitter surpassed any professional development I had received previously or research I had done on my own. It didn’t take me long to build an extensive PLN (Professional Learning Network) that I could reach out to whenever I needed help, advice or encouragement.

Because of Twitter and the resources and ideas made available to me by my PLN, I undertook many initiatives in my classroom that I would not have considered previously. First of all, I started this resource blog to organize the numerous resources I found on Twitter.

Then, I set up student blogs on http://kidblog.org/ and introduced my students to the blogosphere where they blogged tout en français. I set up a YouTube channel to collect French videos for my students to watch in class or at home. My students worked on projects with various Web 2.0 tools such as Voicethread, GoAnimate, Prezi, Glogster, Flipsnack, Animoto, Tripline, Storybird and XtraNormal (amongst others). I then set up a Wiki to display my student projects. Just before Christmas, my classes became involved with @LiamDunphy’s QR code Christmas Card project and we exchanged cards with children from all over the world. We then used Google Maps to map where we received cards from.

With my Twitter connections, I was able to create and collaborate with other teachers and students around the world on projects such as "Dear Foreign Language Teacher", "Les mots qui riment" and "Les sons des animaux".

But probably the most rewarding thing for me on Twitter was the sense of connectedness I developed with other educators around the world. Last summer I travelled to London, England, for a conference, and met up with members of the #mfltwitterati. These were educators I “met” on Twitter and they welcomed me with open arms like an old friend. Truly remarkable. 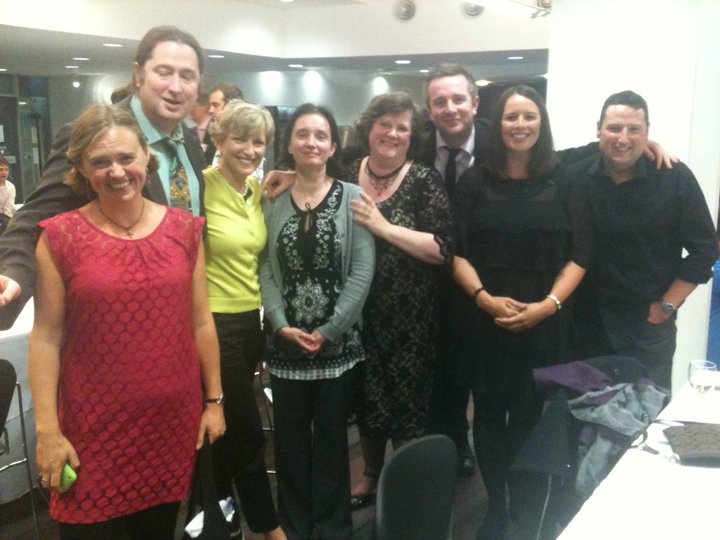 Another Foreign Language teacher on Twitter, @AudreyMisiano from New York, came to visit my classroom last year and we have become fast friends, remaining in touch via Twitter.

(Audrey and I at the AIM Language Learning Summer Institute East in Barrie, ON, July 2012)

In conclusion, I now cannot imagine life without Twitter. After 25 years of teaching, I feel constantly invigorated with the ideas I receive on a daily basis through tweets, and my students are engaged with technology like never before. And that award? It is hanging up proudly in my classroom where I glance at it from time to time and say “Merci” to Twitter, my PLN,  and @joellerudick.

(P.S. A big thank you also to @BigGeoffC for supporting my nomination!)

Connect with me on Twitter! @sylviaduckworth
Posted by Unknown at 21:44